red is blue and blue is red and we are all together... 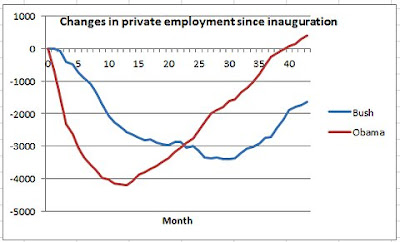 The spike in public employment (at month 16) is attributed to the temporary hiring of census workers.
Posted by Folded Sky at 16:57 1 comment: 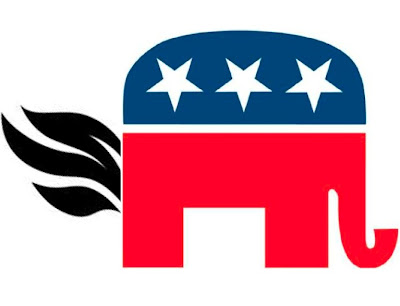 "The thing about [vice presidential candidate Paul] Ryan is that he has always resided in a counter-factual universe. He is a product of the hermetically sealed right-wing subculture. Many of the facts taken for granted by mainstream economists have never penetrated his brain. Ryan burst onto the national scene with a dense, fact-laden attack on the financing of Obama’s health-care bill that was essentially a series of hallucinations, pseudo-facts cooked up and recirculated by conservative apparatchiks who didn’t know what they were talking about or didn’t care. His big-think speeches reflect the influence of fact-free conservatives and collapse under scrutiny."
— Jonathan Chait, New York Magazine
Read more...

"At a basic level, what bothers me about politicians who lie, especially at a national level, is that the deceptions are insulting. A candidate who knows the truth, but makes a deliberate decision to deceive, is working from the assumption that Americans are suckers.
And last night [Thursday, August 29, 2012], Paul Ryan made painfully clear that he thinks we're all profound idiots who'll believe an endless string of lies, so long as they're packaged well and presented with conviction. Jonathan Cohn suggested last night's address may have been the 'most dishonest convention speech' ever delivered, and I can't think of a close second. It was a truly breathtaking display of brazen dishonesty. Paul Ryan looked America in the eye and without a hint a shame, lied to our face."
— Steve Benen, The Maddow Blog
Read more...
Posted by Folded Sky at 13:29 1 comment: